At all! If I could choose my type of back yard it would be an English cottage garden. Well, the funny thing about that is the fact that I live in Phoenix Arizona. All rock, no cottage! Unless I change it up myself… and that is exactly what I’ve set out to do. I’ve always wanted a little potting bench area so I’ve decided to put one together with rustic and vintage items that I love. But the first thing I had to do was get rid of the rock and replace it with a red brick pad (remember English cottage garden?). 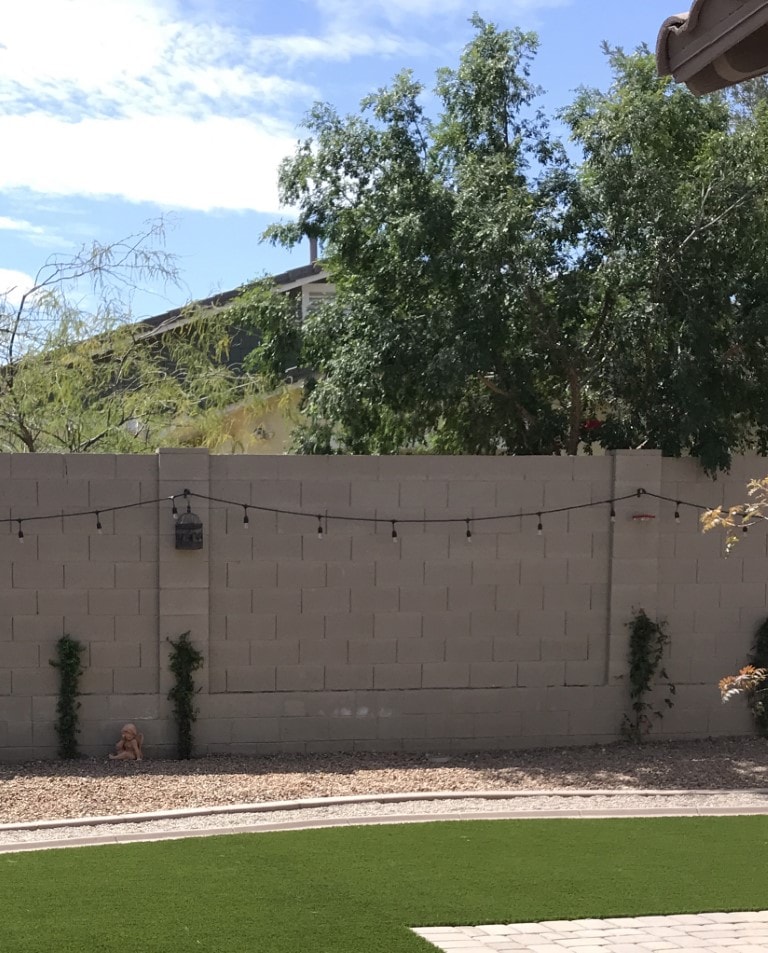 My little area is just that…

little. 9 feet long and almost 3 feet wide. Easy Peasy!  If you follow me on Instagram @somethingpaintedwhite, you may be very familiar with this area as I include it in my nightly videos with Jimmy and Greta (my two fluffy Havanese dogs).

For this job, I’m going to need a few supplies…

I bought the brick at Lowes

for .56 cents each and by my calculations, I would need about 100 brick. I already had 4 that I bought previously because I wanted to see if I thought it was going to look ok. But I went ahead and bought 110 just to be on the safe side. Thank goodness I remembered to take my gloves with me to the store to load all those bricks onto the cart and then into my car.

Anyhoo, the first thing I had to do

(was vacuum out my car) but after that, I had to rake all the rock (as much as possible anyway) out of the area that the brick is going to be laid in. Not an easy job when you have 3-4 inches of 1″ rocks. Not to worry…I got the job done and am ready to move to the next step…leveling the ground. Leveling might be a bit of a stretch… let’s just say I made the ground as flat as I could with a shovel and rake. Moving on! 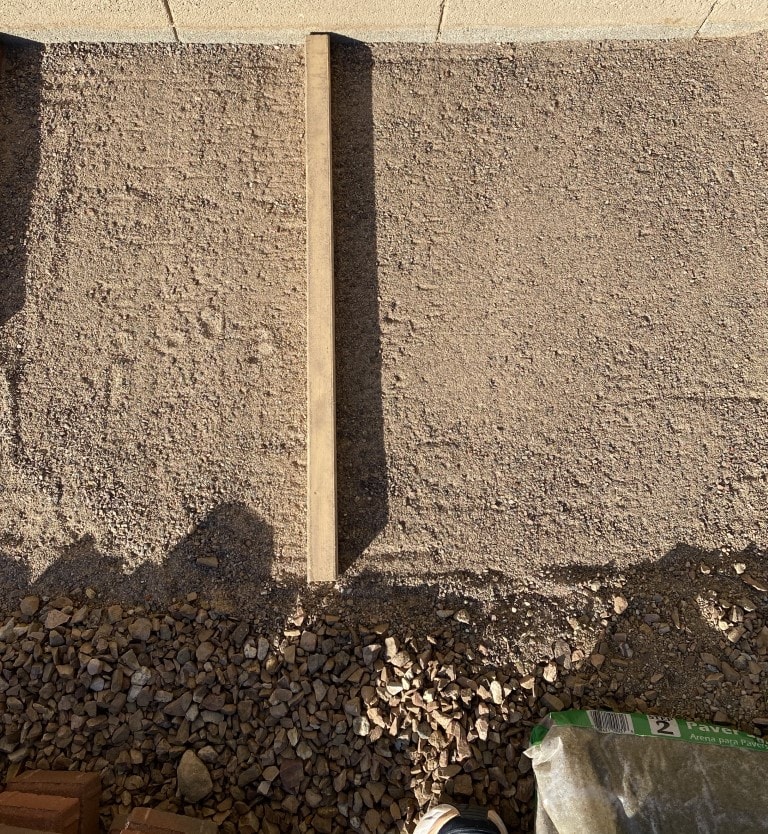 Level (sort of) the sand

I purchased 5 bags of Paver Sand

for my potting bench pad and dumped 4 of them out at equal intervals. (sorry I forgot to snap a photo of that step) Then, using my shovel, I spread it out as good as I could but then came the part where I had to try to be as much of a perfectionist as possible. (perfection is not my strong suit!)

and using my miter saw I cut it to the exact width of my potting bench pad. I then used that 2×2 as a trowel and smoothed out the sand and did my best to level it. 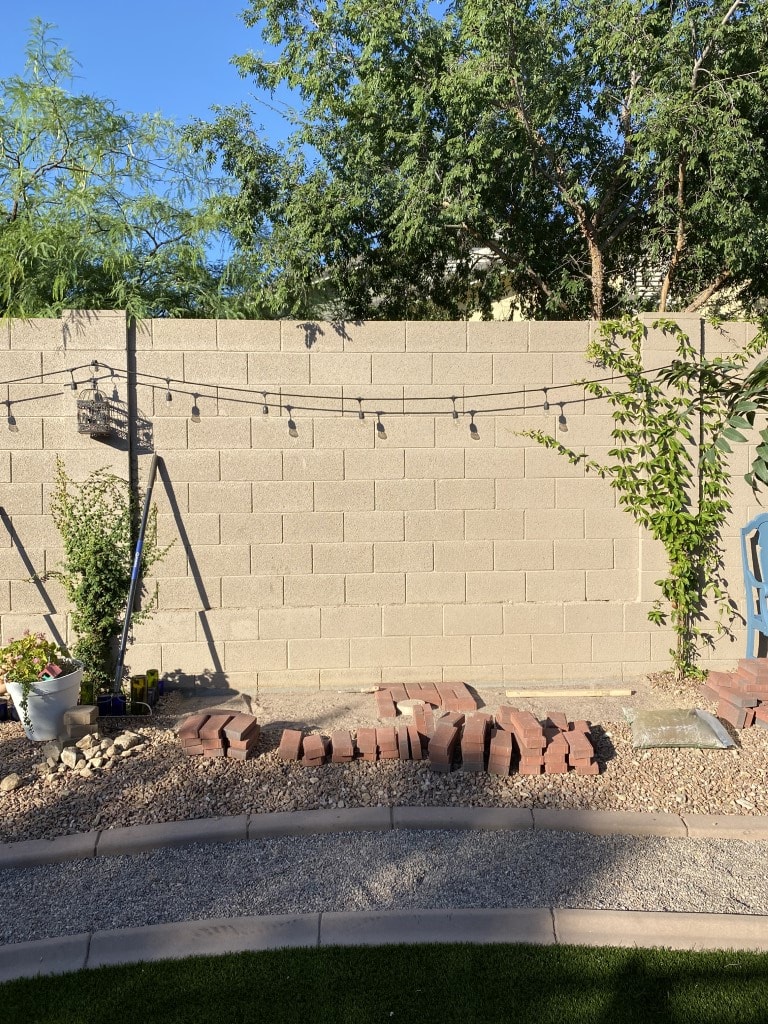 I started in the middle

because there just happens to be a landscape irrigation thing-a-ma-jig right smack dab in the middle of where I want this red brick pad.  No worries…I can work around that.  So I did! 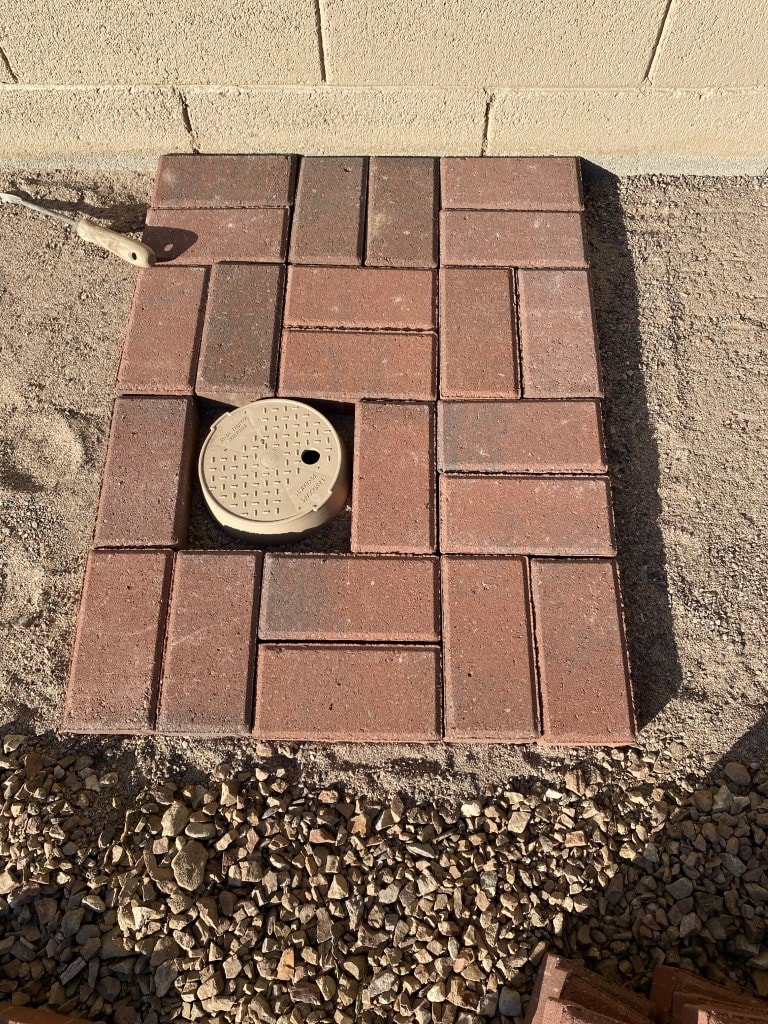 I decided to lay the brick

in a pattern with 2 bricks going one way and then 2 bricks going the opposite way...I’m sure this particular pattern has a name but I don’t know what it is!

Anyhow…I had to fudge

just a bit because of that darn thing-a-ma-jig but it worked out ok so I just kept on rolling! 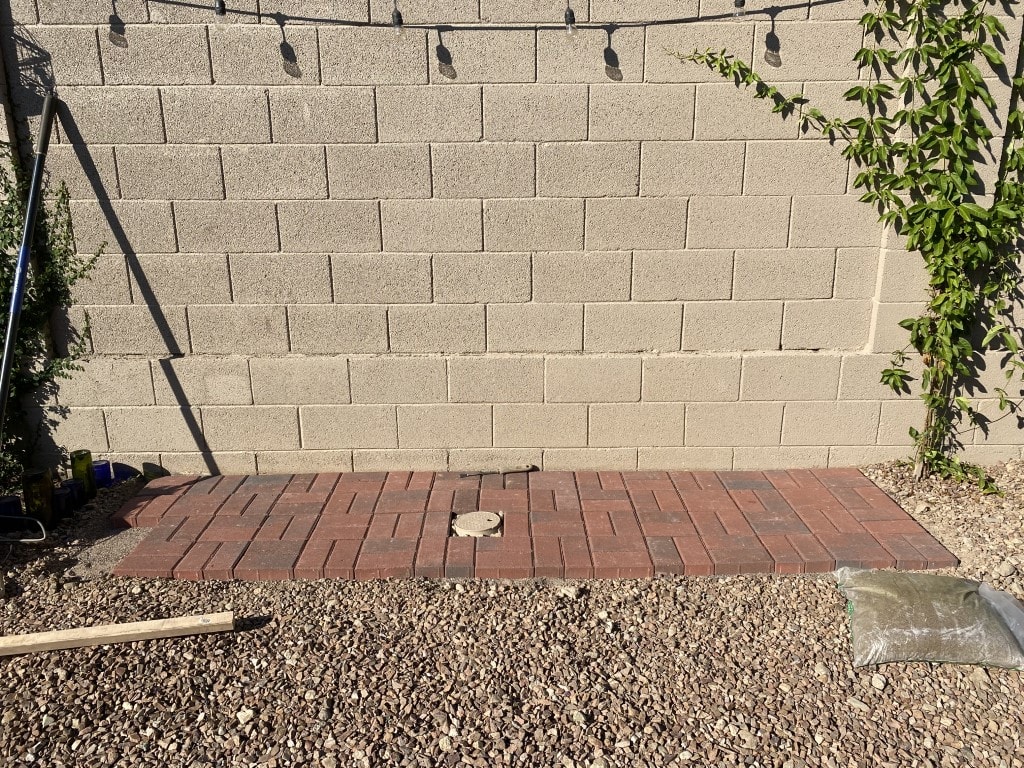 The actual laying of the brick was pretty easy…

and fun, in my opinion! Occasionally I would lay a brick down and it was obviously not flush to the one beside it so I would just pick it up and smooth out the sand under it with my hand and then lay it back down. Can you see way over on the left side of the photo that there are some bricks missing??? (insert forehead slap) 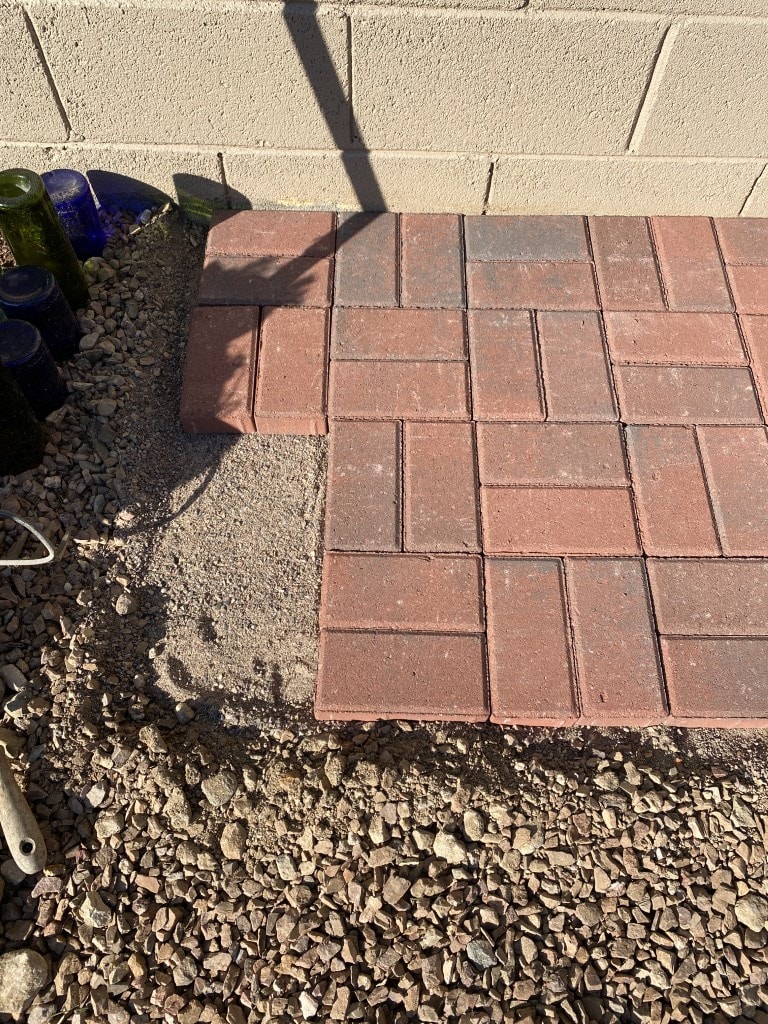 Back to Lowe’s…for FOUR BRICKS! (and a hummingbird feeder because it was cute and I like hummingbirds) so there! 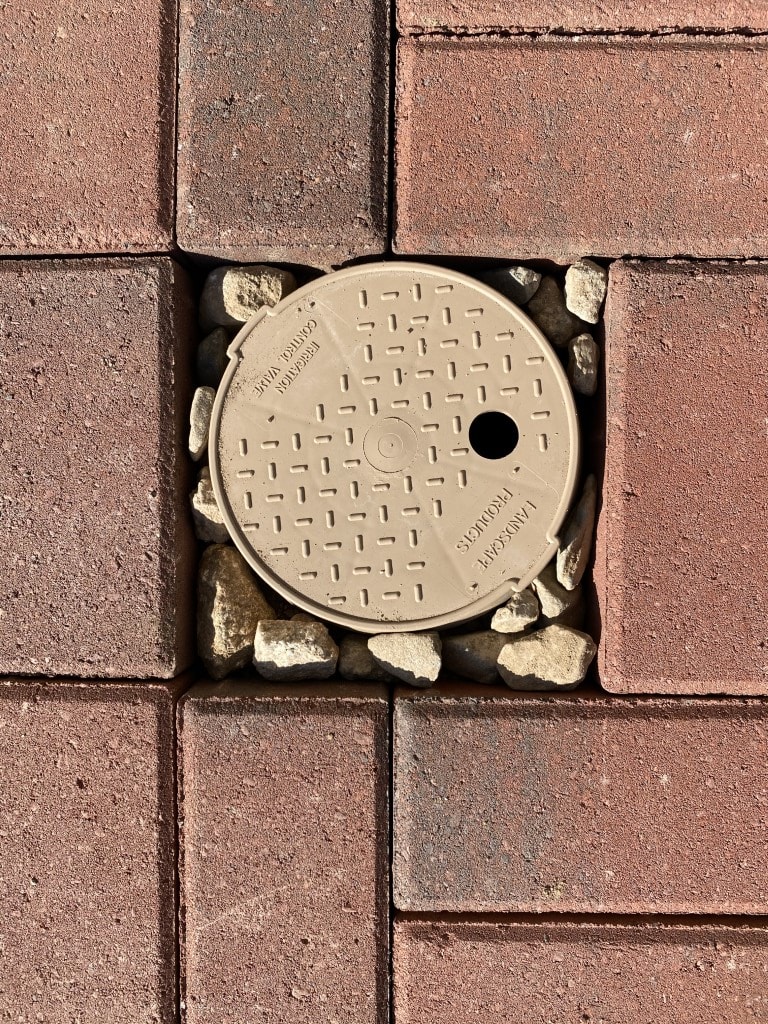 it’s time to fill in the cracks.  I needed to do something about this thing-a-ma-jig/valve box (can a round thing be called a box?, seems weird) anyhow, I decided to fill in the extra space around it with rocks that I dug out of the ground as I was sort of leveling it! 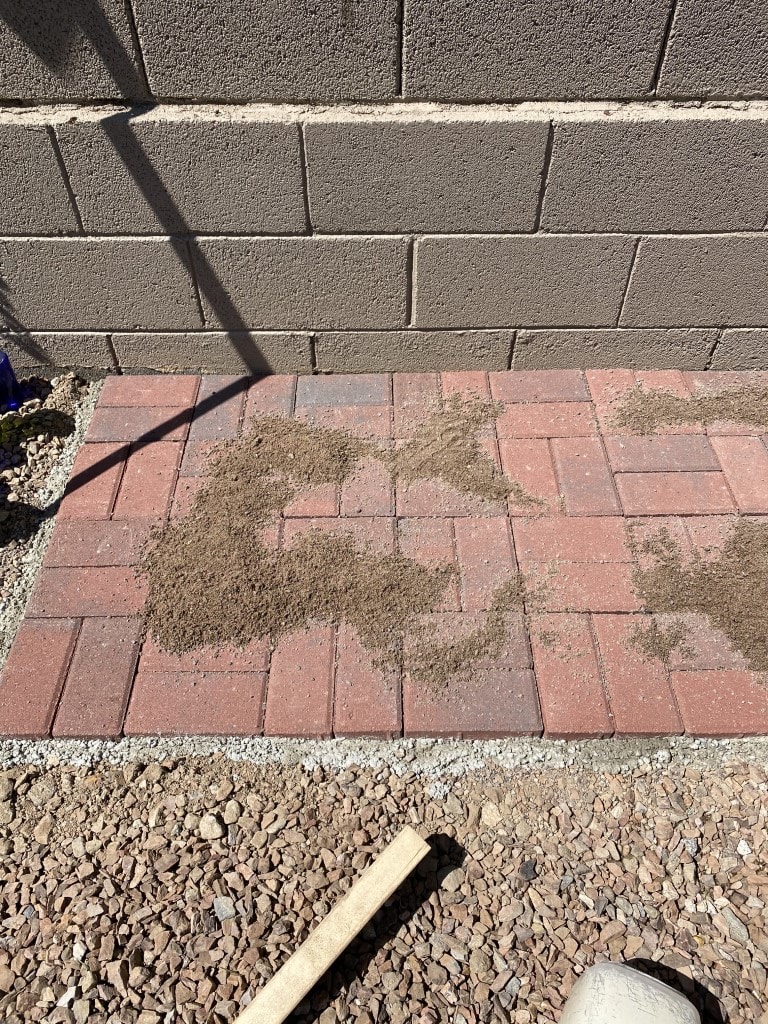 I used the last bag of paver sand

to fill in the cracks.  Well, kinda!  In hindsight, I now realize I should have used much finer sand for this part of the process.  Paver sand has lots of tiny little pebbles in it so it was not easy to fill cracks but I gave it a good try! 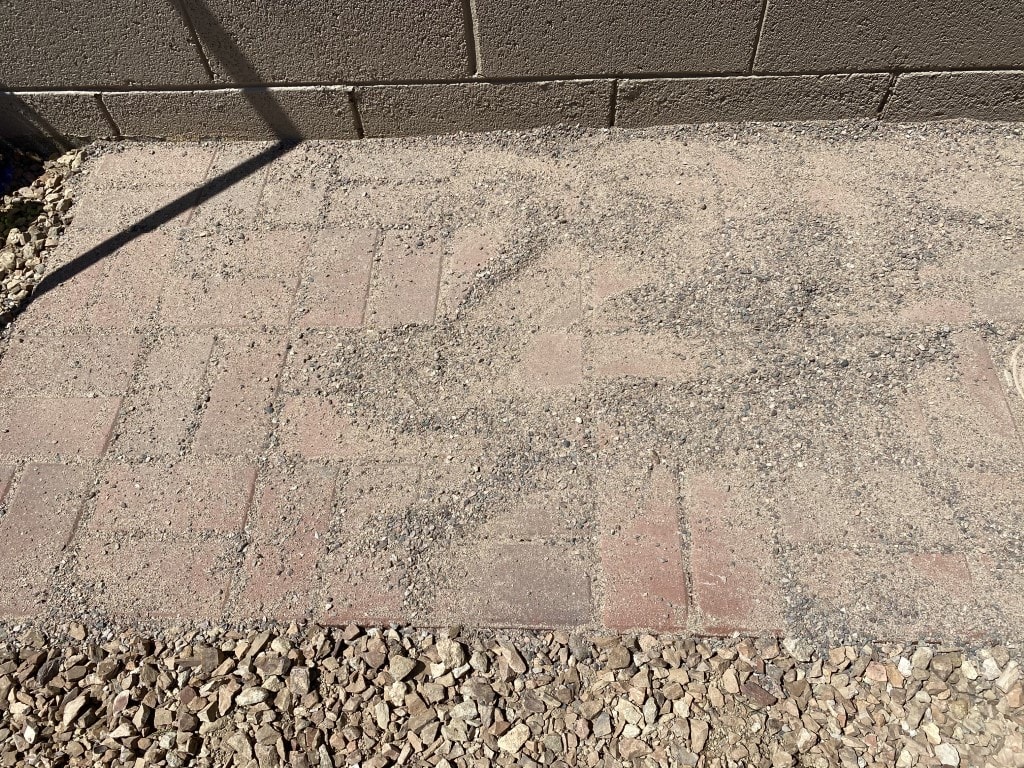 I got down on my knees

and used my gloved hands to rub the sand all over the bricks, trying real hard to get as much into the cracks as possible.  It was about 100 degrees outside when I was doing this so it didn’t take me long to decide that cracks aren’t that big of a deal. Sweep up the remaining sand and move on!!! 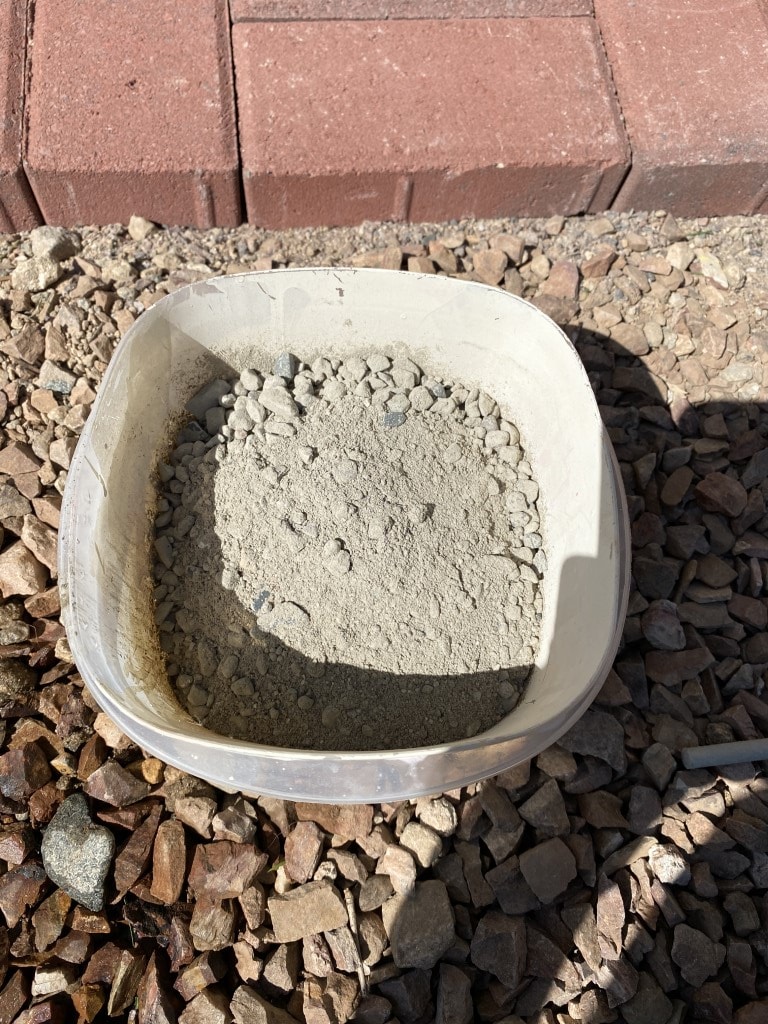 When the professional bricklayer

laid my pavered sidewalk last winter he used concrete (or something that looked like it) along the outside edge to keep all the pavers in place.  Looks easy enough!  Let’s give it a try on my potting bench pad. 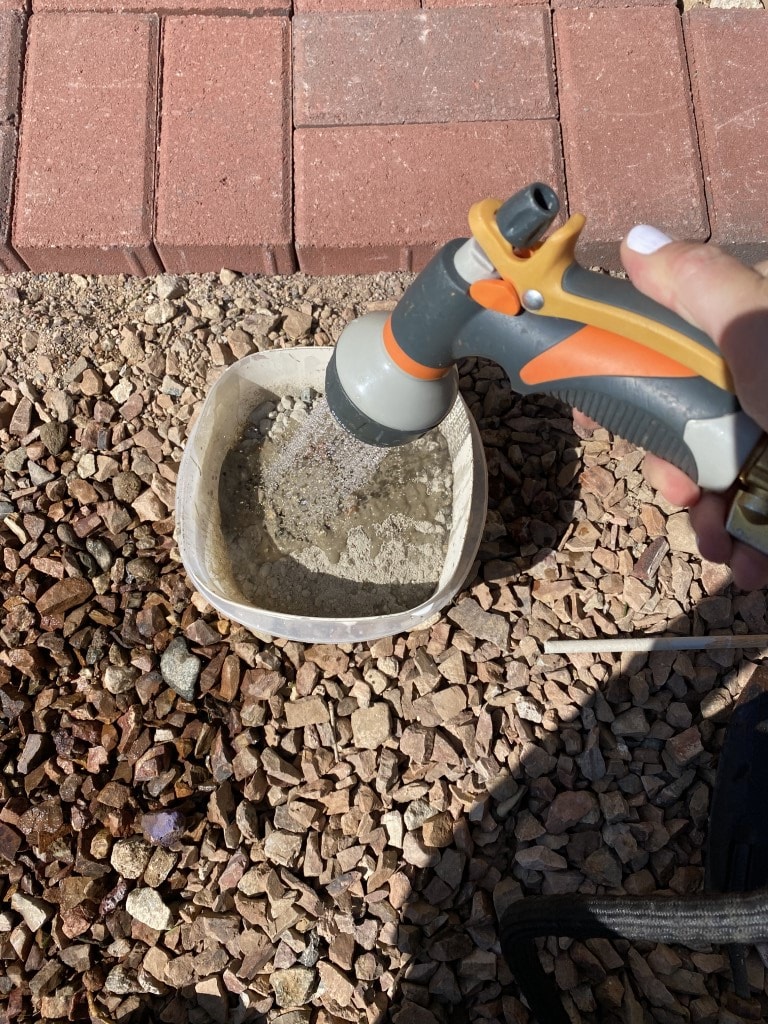 Pour some Quikcrete in a bowl

that is already ruined from paint and add some water. Stir to desired consistency (my only desire was that it work and that I could scoop it along the edge of the bricks)! 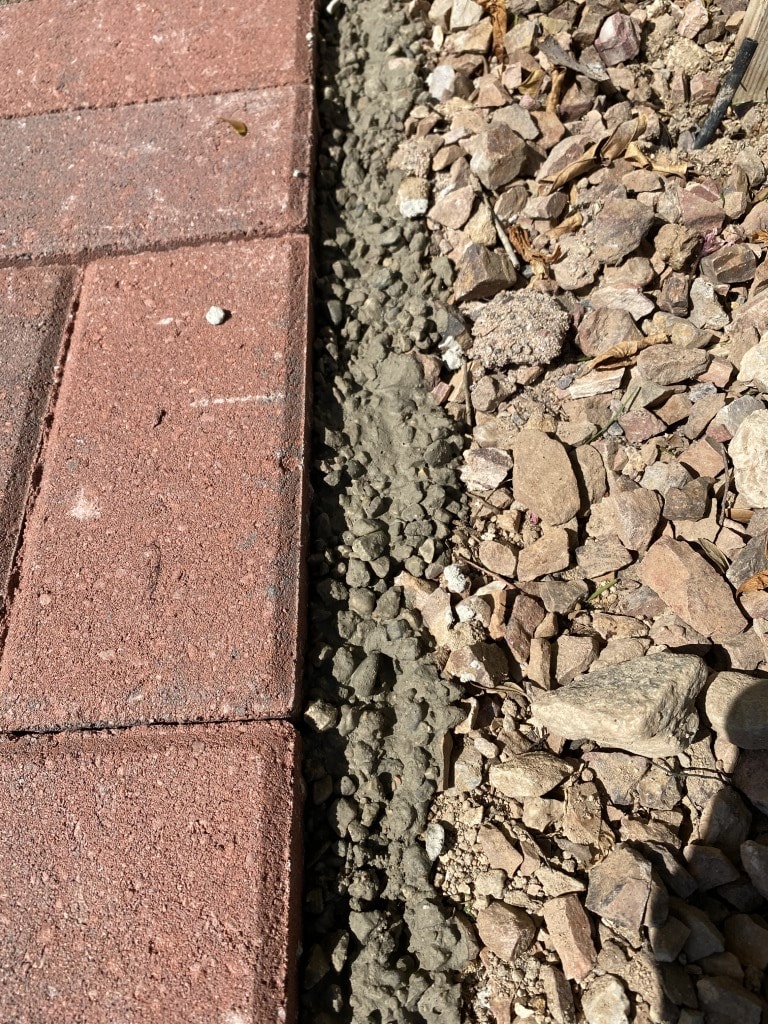 I must have had my ratio right…

or at least good enough because that seemed pretty easy!  I used a small shovel and just scooped it all along the outside edge of the brick pad and then tapped on it to level it a bit.  I tried to keep it below the top of the brick pad so that I can cover it with rocks (since they’re all-around this area of my yard anyway). 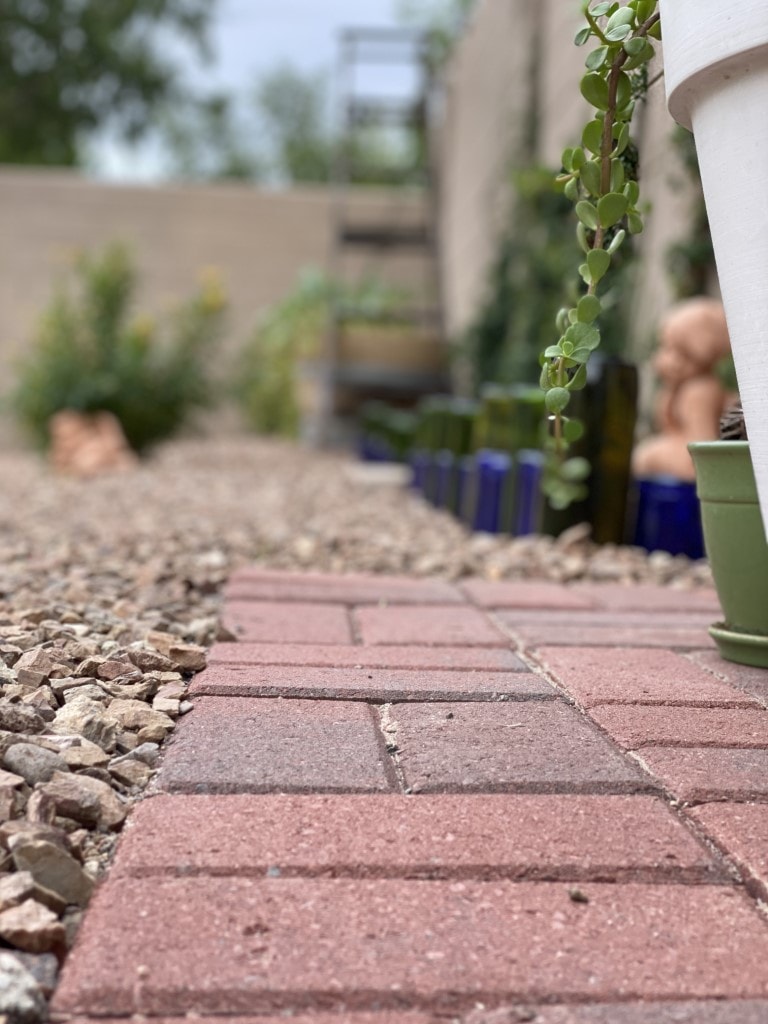 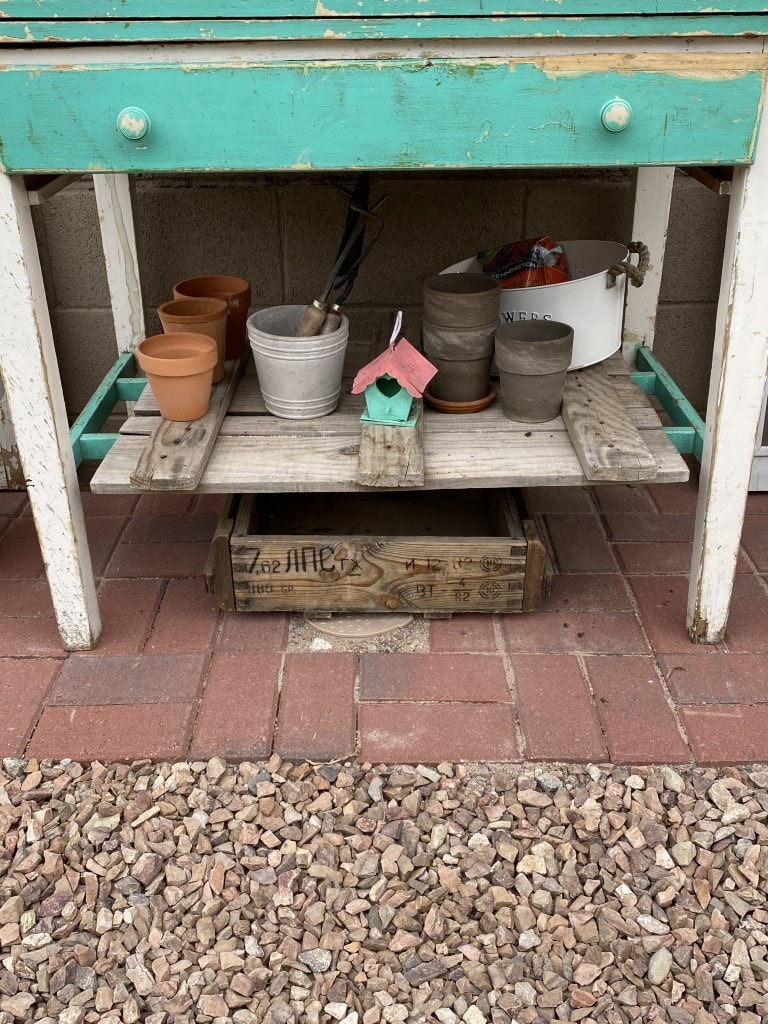 doesn’t even matter now…really, it doesn’t! 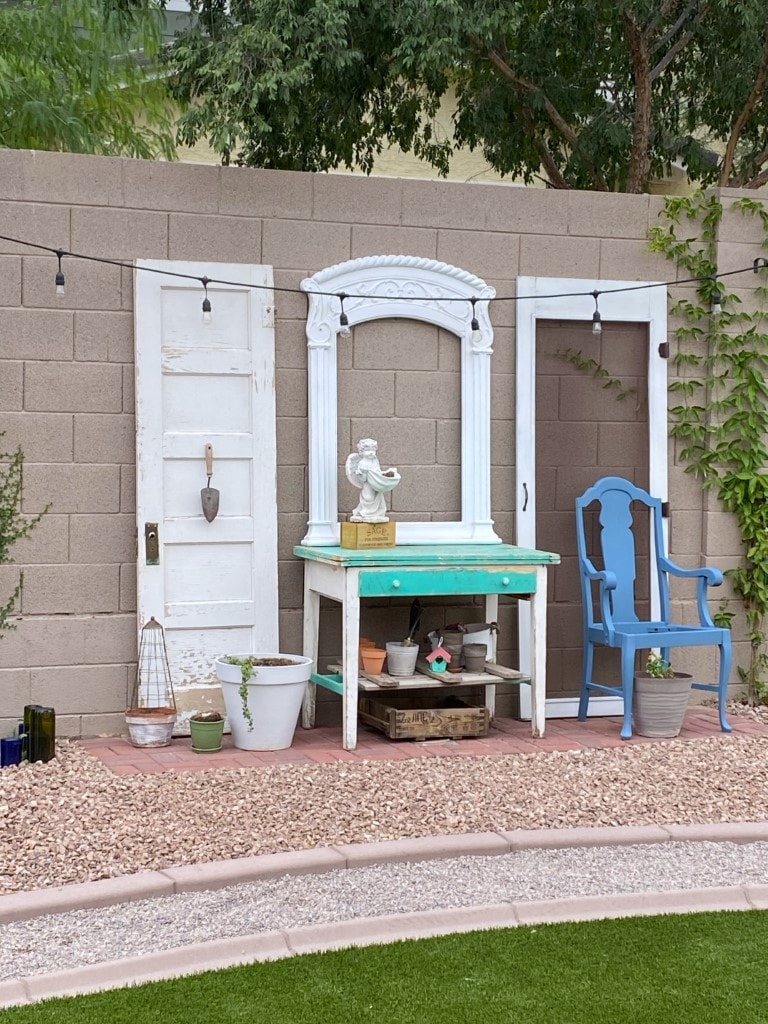 It certainly looks better than it did

a few months ago…(see the first photo). This is what it looked like when I first set everything on the red brick pad, but I have since made a few changes with paint, new hardware, and a different chair!  I recently found a second small ice cream chair and I also painted my herb boxes that I got from www.decorsteals.com.  I wanted to give them a bit of a weathered look.   Now I just need some plants and flowers and I have a sign that I want to put out here as well. 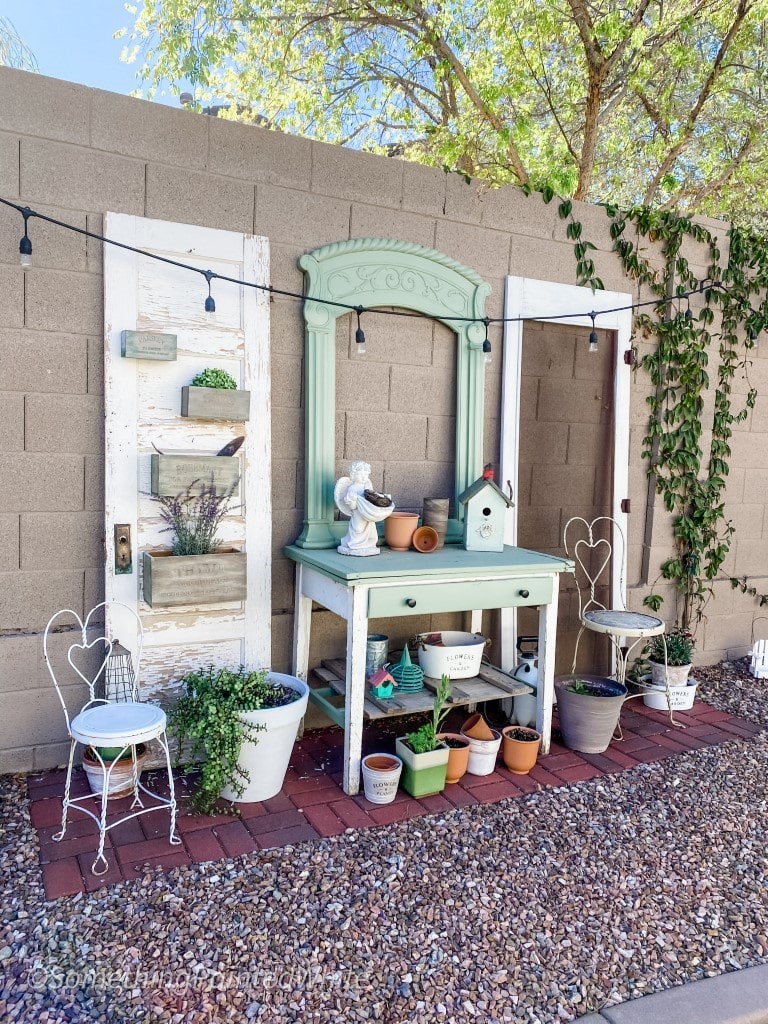 Table and arched frame are painted

and new hardware installed. I used Benjamin Moore Kennebunkport Green and I love it!  So soft and muted.  I’ll be adding accessories and maybe even a shade to this area eventually.   For now, I love having this cute little decorated area of my backyard!

I’ll be sure to update you

when I make any changes. I actually created this red brick pad for my potting in June of  2020 and started writing the post but didn’t finish it until now!

If you made it to the end of this wordy DIY post, thank you for your dedication.  Remember…if you want something done right…hire a professional!  LOL!!!

Have a fabulous day my friends!

Latest posts by Cindy (see all)

As an Amazon Associate I earn from qualifying purchases.
Subscribe
6 Comments
Oldest
Newest Most Voted
Inline Feedbacks
View all comments

I love this! I need to create a brick pad down at the duck hut to put the duck’s water on!

I love that you’re calling it the duck hut! You’re going to have so much fun with them!

Cindy I got hooked on the bricks! Now I want to cover half my lawn with these. I remember you doing it and they friend out great! Excellent description too! Glad to see you maintain your sense of humor In your writing! 😉

Thank you so much Jean! I appreciate your comment and kind words! I’m still pretty proud of myself for laying those bricks and will most likely be laying more up at the ranch this summer! LOL! Sheesh, I need an easier hobby! LOL!

You continue to amaze me with your projects! You are welcome and btw did I tell you I have this little brick project in my backyard……..???

Bev, you are such a sweet cheerleader, I appreciate your support so much! And I dont think you’ve told me about your little brick projct! I need details! 🙂

I love thrift stores, flea markets, yard sales and good junk! But I really don’t like spending a lot of money, which you probably figured out by where I like to shop.

This is definitely my favorite! ❤️ With open s

Downsizing doesn’t have to mean LESS, I think it

Small spaces can be colorful too! 🎨 I’m cravi

When we decided to sell our home in the valley and

Snow day! Just had to share this sweet moment capt

Thanks for the memories 2022! We saw lots of chan

Merry Christmas from our corner of the world, to y