Oh hi!  This is Dee, Mr. SomethingPaintedWhite, doing a blog takeover.  Cindy will be back to post more awesome projects later.  For now (for this post at least) you’re stuck with me.  🙂

Have you ever priced long curtain rods?  Well, I have and they ain’t cheap!

But I found a way to make long curtain rods that don’t cost a fortune and, more importantly, don’t look like you made them in 7th-grade shop class.

But first, the backstory!

The front room (so named because it’s the room at the front of the house) is easily one of the least-used rooms we have.  Most of our time is spent in the back rooms of the house; the living room, master bedroom, kitchen and all of Cindy’s workrooms are back there.  The front room is mostly used by Jimmy and Greta to look out the front window and bark at things. Birds, people, dogs, wind… all the things!

One reason we don’t use the room very much is that we just don’t often need the space (first world problems). We also don’t use it because it’s not finished.  It’s so little used that I still haven’t hooked up a FireTV stick to it! (I know!!) It isn’t fully furnished yet and (get ready for it) still has crappy old blinds.

We’ve known for quite a while that the blinds had to go.  We’ve also known for quite a while that we wanted to replace them with a nice wooden corbel and curtain rod combination. The problem is that we’ve never been able to find the right look for it at a price we could justify spending.  Having the warmth of real wood is part of the design of the room (he says as if there’s actually a plan in place), but nobody has wooden curtain rods long enough to cover our 3-window setups, over 8 feet.  And there are two in that room.

There are several DIY tutorials on making long curtain rods out of metal rods, conduit or PVC pipe but that really takes away from the look and warmth of wood.  I also didn’t want to get something that would require a middle bracket to hold up the rod, so it had to be sturdy material. Of course, Lowes and Home Depot didn’t have anything that long… nobody did.  Nothin’ But Dowels, Dowel World, Dowels Dowels Dowels Dowels…  nobody had it.

Cindy found some longer wooden dowels, but evidently, there’s a heavy tariff on wooden curtain rods… they were over $100 and couldn’t be shipped to our area. I blame Trump.

I had the bright idea to use a threaded connecting rod to join 2 pieces together, but after doing a little research and testing found out that it wouldn’t provide the necessary strength. Plus I’d have to be able to drill exactly in the center of the ends of the dowels.  Center-drilling precision isn’t really my strong spot.

But coming up with workarounds is!

I had the bright idea to join 2 dowels together using an angle cut.  After verifying my idea with Google (of course, I wasn’t the first one to do it that way) I was off to Lowes to buy 4 6-foot 1.25-inch wooden dowels (2 sets of windows) at $7.98 each before the military discount (thanks Lowes!)

While I was out shopping for the dowels, Cindy started cleaning the gunk off some corbels she found at Goodwill.  $5.00 each ($20 total for you math geniuses)

We hate the stickers that Goodwill uses to put their price on things because it is SUCH A PAIN to get off.  Especially from wooden items.

But these corbels had a bit of extra gunk on them that made them unusually tough to clean off.  Someone had stuck super-sticky foam pieces on the tops and backs of each of them (I don’t know why!) and we couldn’t get them clean.  Goo Gone, scrapers, baby oil, light explosives… it just made them worse.  So we cleaned them off as much as we could and told ourselves nobody would be seeing that part of them anyway.  Sometimes good enough is good enough.

Cindy cleaned up the corbels, sprayed some white paint on them and distressed them. 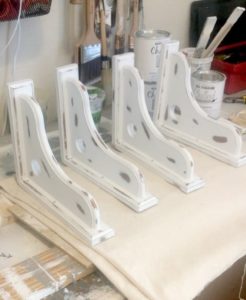 Corbels drilled, painted and ready to be useful.

I tested my angle-idea with some scrap dowels we had laying around.  Doesn’t everybody have scrap 1.25-inch dowels? I found a problem in that the angle of our saw only goes to 50 degrees. That wouldn’t provide nearly enough surface area, so I had to improvise a bit. Using a bracket I built as a proof-of-concept for some garage storage, I was able to get another 30 degrees. Maybe one of you math geniuses can tell me what my angle actually was; all I know is that it worked! 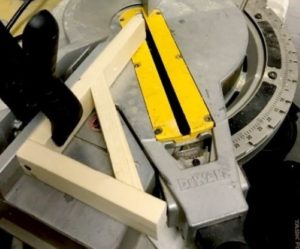 Sometimes you have to get a better angle…

I ended up with approximately 8 inches of surface area on each cut, which was enough to get a good solid bond with some wood glue and a couple of nails. 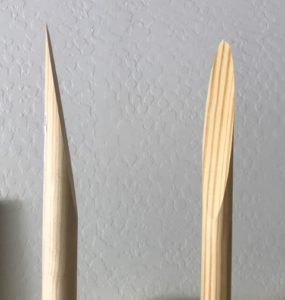 The cuts actually worked (I almost never doubted they would) and everything lined up perfectly! I swiped a little wood glue on the angle cut and taped them together really tightly. 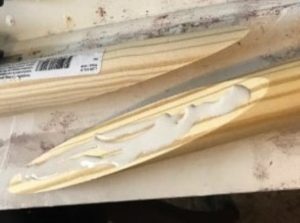 After letting them dry for 30 minutes, I sunk a nail in each side with the nail gun, took off the tape and started sanding.  Each needed a touch-up of wood filler in a couple of places but turned out almost seamless. 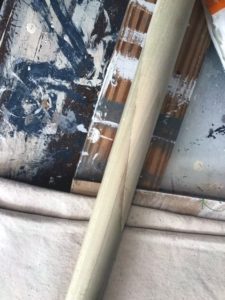 I cut them to the right length and Cindy slapped a coat of paint on each rod while I hung the corbels.  After some dark wax was rubbed on to the long curtain rods, they were ready for hanging. It was curtains for them! 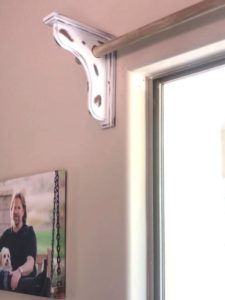 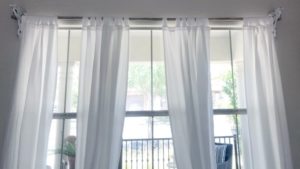 What do you think… did we do ok or would you have done something differently?

Often referred to as “that long-haired computer guy”, Dee Hathaway is a government technology leader who loves figuring out how to do things better and then bragging about it on his blog. His first book Here's What Let's Do: Stop Being Average and Start Being Awesome was an Amazon #1 bestseller.

Latest posts by Dee (see all)

As an Amazon Associate I earn from qualifying purchases.
Subscribe
1 Comment
Oldest
Newest Most Voted
Inline Feedbacks
View all comments

Hi, friend! Love your blog. So many great ideas!

I love thrift stores, flea markets, yard sales and good junk! But I really don’t like spending a lot of money, which you probably figured out by where I like to shop.

This is definitely my favorite! ❤️ With open s

Downsizing doesn’t have to mean LESS, I think it

Small spaces can be colorful too! 🎨 I’m cravi

When we decided to sell our home in the valley and

Snow day! Just had to share this sweet moment capt

Thanks for the memories 2022! We saw lots of chan

Merry Christmas from our corner of the world, to y